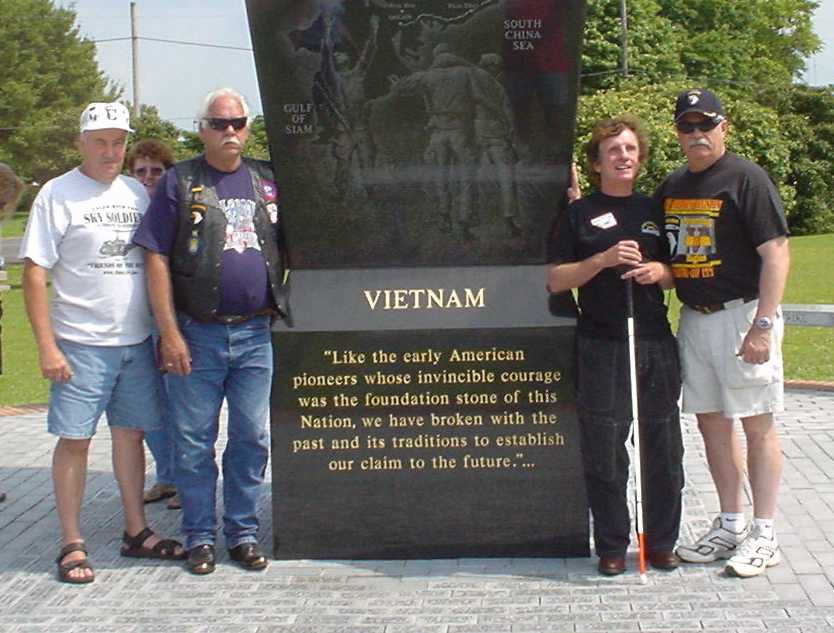 Doug Grier and Dan Baker made it to the division review and marched with the other vets in front of the division and made the front page of the local paper. The 2nd Brigade BBQ and dinner were well attended with all 2/501 companies represented. Friday evening the new RVN Monument was dedicated by Division HQ. Doug Grier and Pat O’Leary attended and got to meet Don King (yep the fight promoter!) and also met privately with the 101st Division Commander. We also visited the Pratt museum which Doug Grier really enjoyed. Super Saturday was nice with all the displays and aircraft. The Aviation Heritage Group had all their Vietnam era aircraft there. Hueys, Gunships, Loch, and more. (The huey rides were cancelled). We all saw to it that Doug Grier made the rounds. Sat in all the aircraft and even got him into the front seat of the “cobra” gunship. Believe it ya’ll, there are now young soldiers and civilians re-enacting us vietnam veterans! YEP!!!! They staged a combat assault into an LZ after first having the gunships prep it, then the active did about the same thing but finished it off with a rope extraction of a LRRP team. Doug Grier, Pat O’Leary, Dan Baker & Dave Reinheimer were able to get into the VIP tent and watch the whole thing! (Kinda raised the rope, ducked under and got a folding chair to the front row for Doug Grier & Dan Baker) Doug of course, sitting 3 chairs over from his new buddy, none other than the Commanding General of the 101st ABN!!! We all visited the new 101st Vietnam memorial (pictured above) on Saturday afternoon and it is something to see! It’s just inside gate 4 in front of Division HQ.