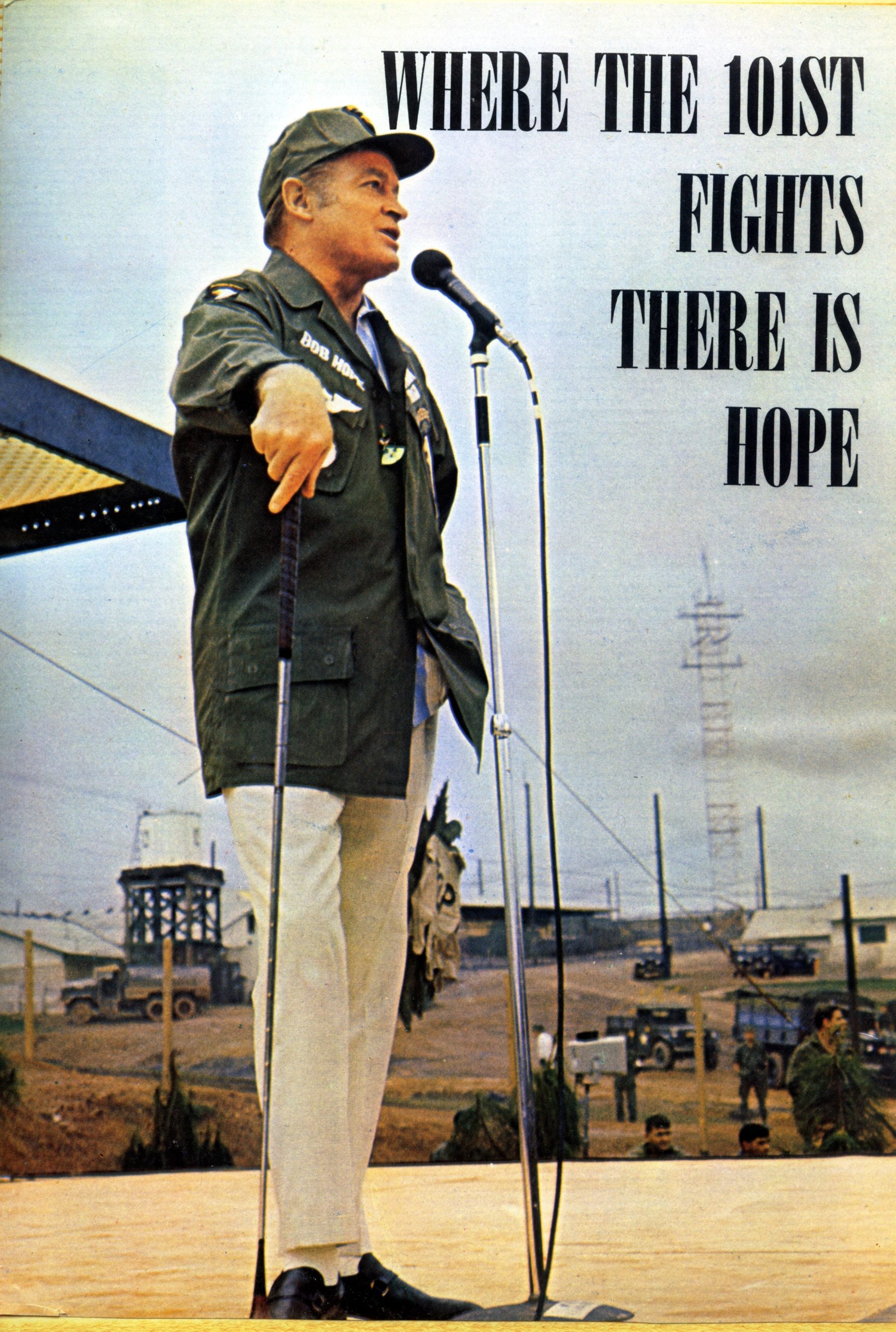 On the early troop tours, Hope and company would venture as close to combat areas as they could get. In the Sixties, it was decided that the beloved American icon made too tempting a target for the Viet-Cong (there were plans for his
assassination) and the productions were mounted in somewhat safer territory.

A controversy erupted during the Sixties centered around the fact that the USO and Christmas specials were being underwritten by the US government – and Bob Hope profited handsomely from the television broadcasts. “It’s a criticism
by groups that are anti-fun.” was his terse reply, “Nobody goes to Vietnam and lays their life on the line unless they want to do it.” Of course, that doesn’t answer the question, but that’s the way things were then.

Bob began what was to become a Christmas custom in 1948. With the end of the Vietnam conflict in sight, Hope hailed his 1972 trip as his last Christmas show but each Christmas that followed, he was somewhere in the country doing a show at a military base or veteran’s hospital. This practice became controversial in the mid-Sixties when public opinion started turning against the war in Vietnam.

The comedian kept on going, despite the controversy – saying it was the troops that mattered, not the war – managing to show his support for the soldiers without coming across as too much of a hawk (like John Wayne was happy to do). 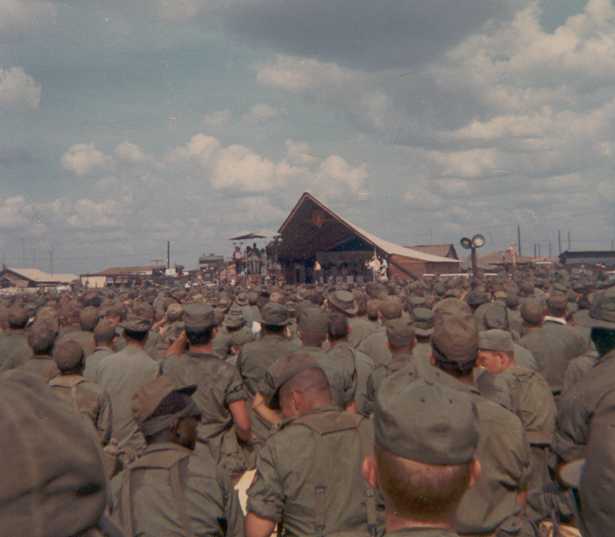 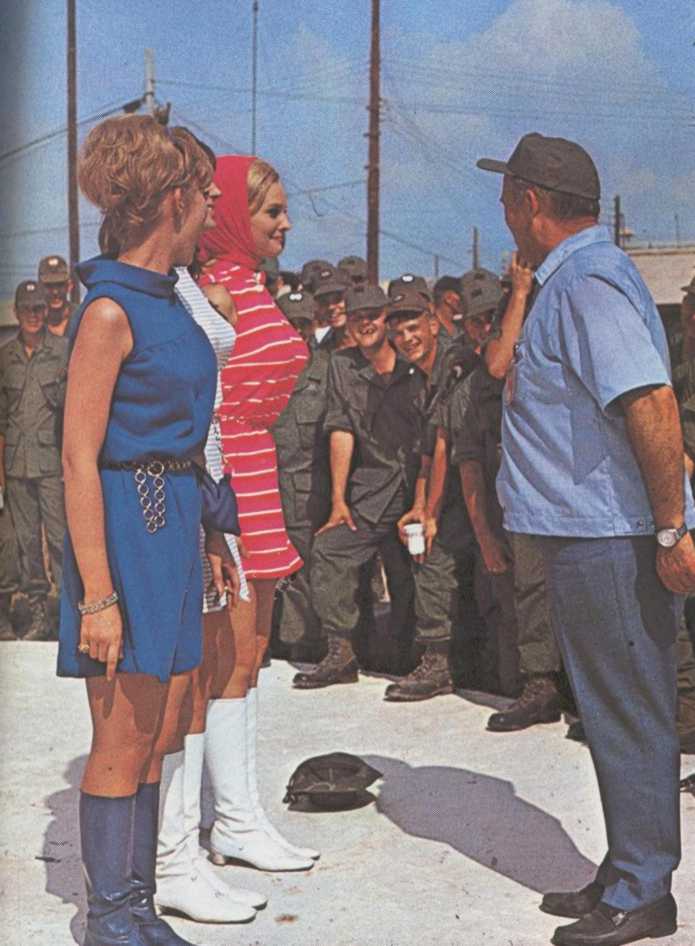 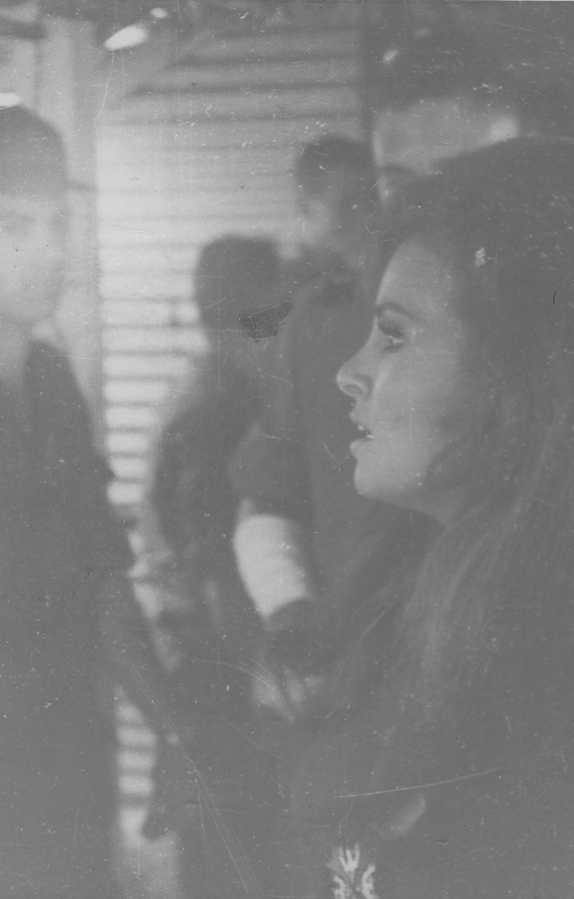 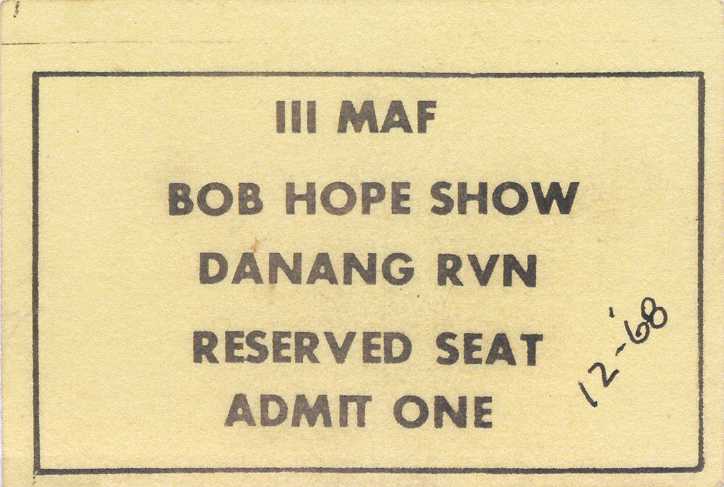 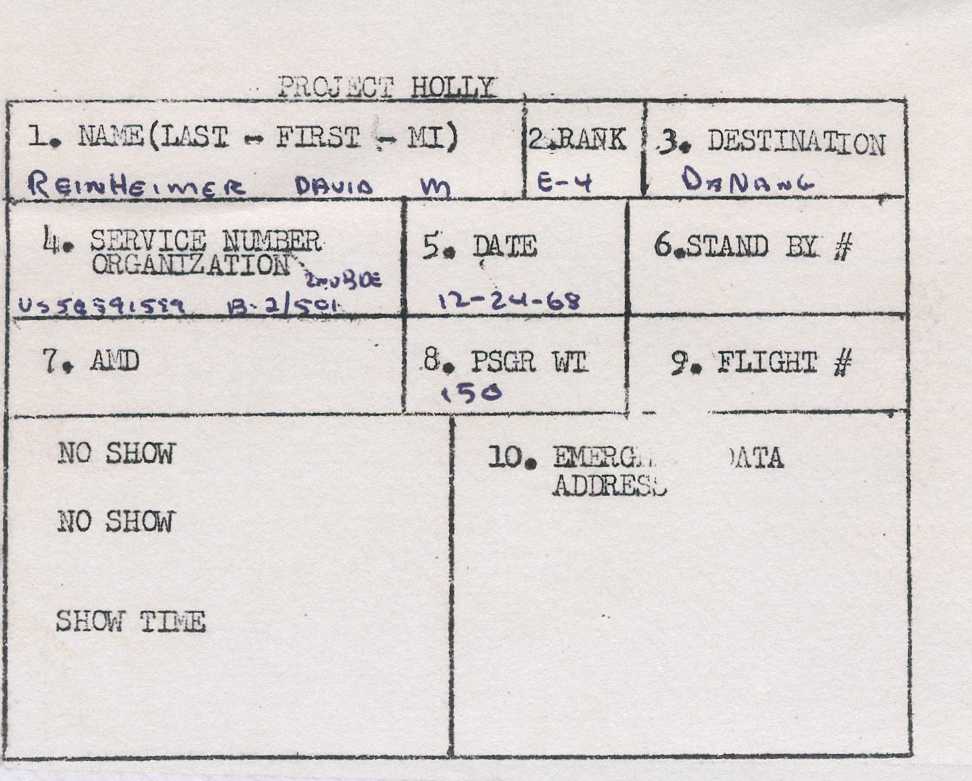 “I don’t have the slightest idea how I was fortunate enough to be picked to attend the show, but I was. We were in a “stand down” mode on FSB Whip during that December. I was summoned from the Company CP to report there. I couldn’t imagine what for. When I arrived, I was told that I had been picked to attend the show. Well, I felt bad that I was being picked over others, but at the same time I was excited and very appreciative that I was. To be honest, I cannot remember who went with me, but undoubtedly, Dave was one. I don’t even remember having a ticket like Dave posted, but I must have had. I do
remember we were transported back to LZ Sally to clean our funky bodies and draw new fatigues and boots so we would be presentable as ‘Screaming Eagles’. The only kind of camera I had at the time, was one of those black and white “Swingers”. You know, the one that gave you the little black and white photo and you had to rub this jell-like stuff on it to preserve it. Well, the roll of film I had in it had about four photo clicks left. While we were at ‘Sally’ we were in a tent getting all spruced up to go. I had my camera laying on a cot. Before I knew what was happening, one of our Chieu-Hoi scouts had picked up the camera, opened the back of it, and exposed all my film. I never felt more like choking someone. Needless to say, I didn’t get any pictures at the show, but I have some very good memories. I still feel very fortunate to have been able to attend one of Mr. Hope’s shows. I have always had a great deal of respect and admiration for what he did for GIs throughout the years. 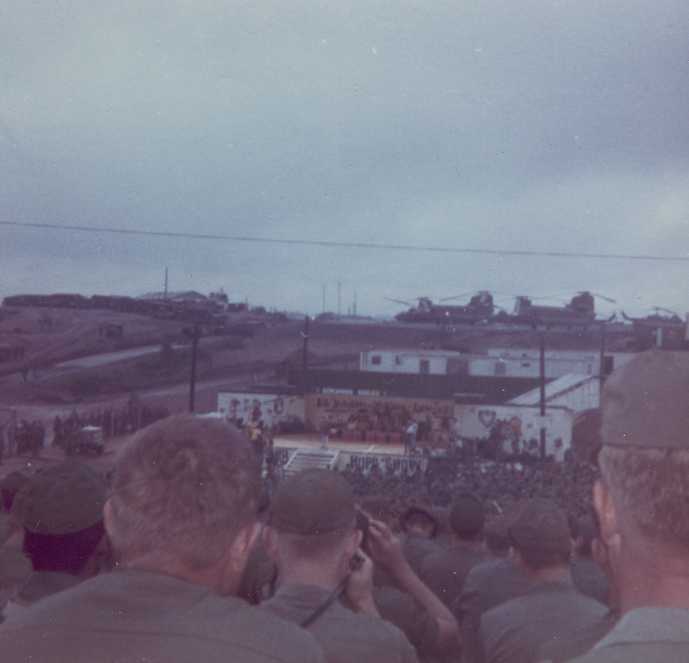 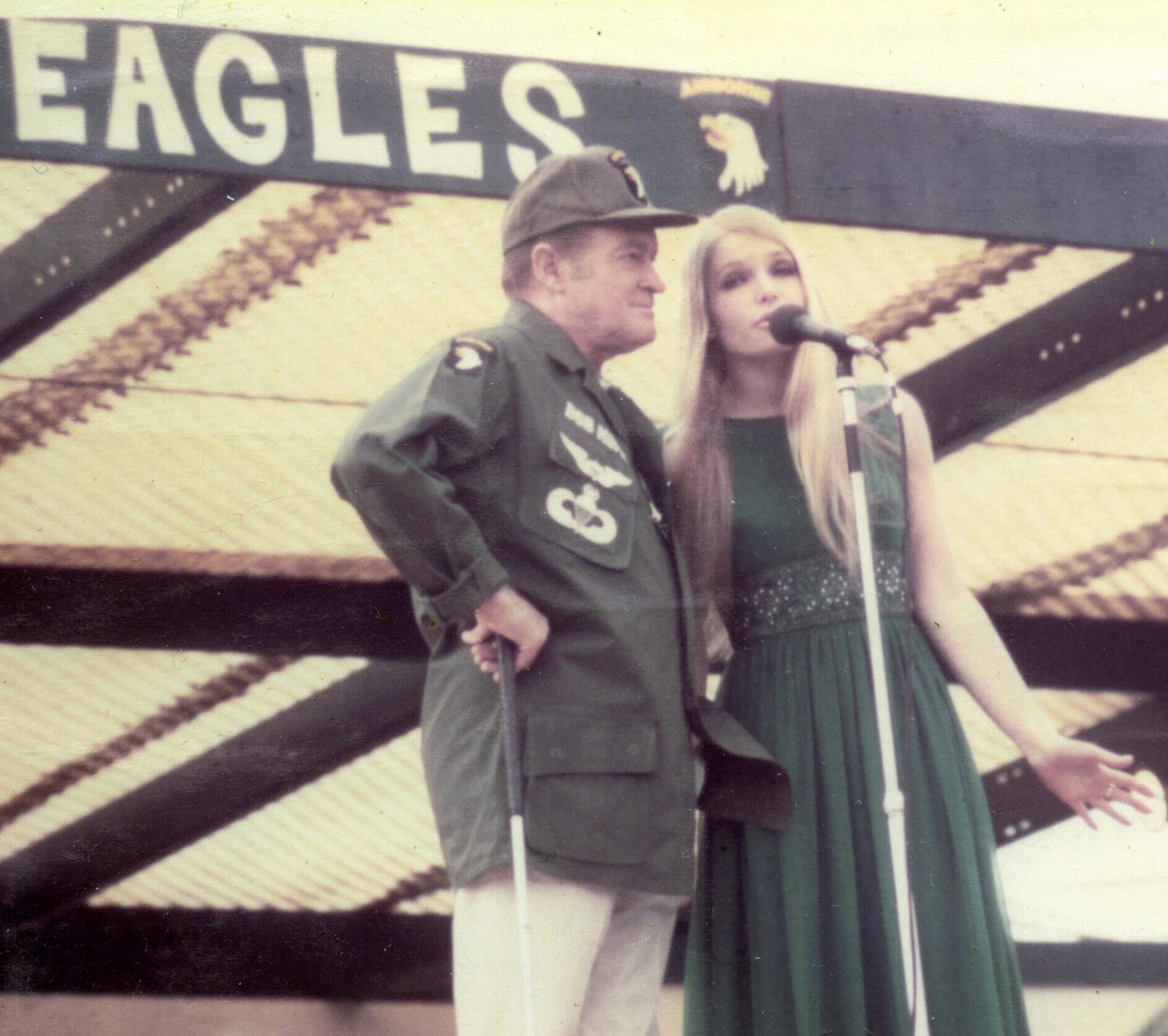 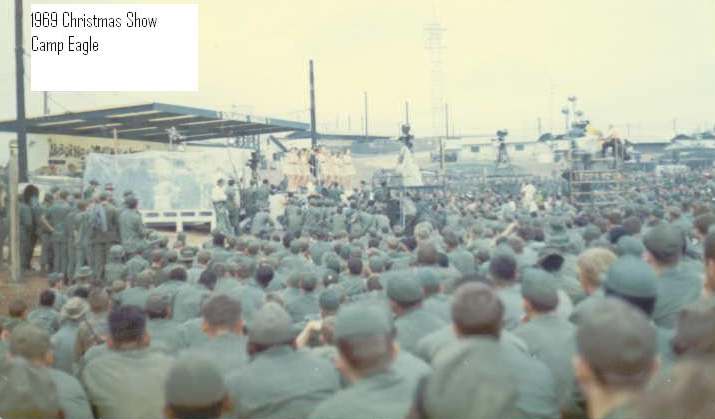 The USO show on Christmas Day 1969, What a show! Bob with his jokes; Les Brown and his Band of Renown; Miss World, Eva Rueber-Staier of Austria, Connie Stevens, Suzanne Charny, Laugh-In’s Teresa Graves, and the Gold Diggers, a troupe of beautiful, scantily clad girls. They sang and danced and got us to howl. Bob even brought along Neil Armstrong, the astronaut who six months earlier had been the first person to set foot on the surface of the moon. It was an unforgettable time. The show was held at Camp Eagle in a huge outdoor auditorium called the Eagle Entertainment Bowl, where more than 16,000 troopers from the I Corps area watched the hour and a half show. 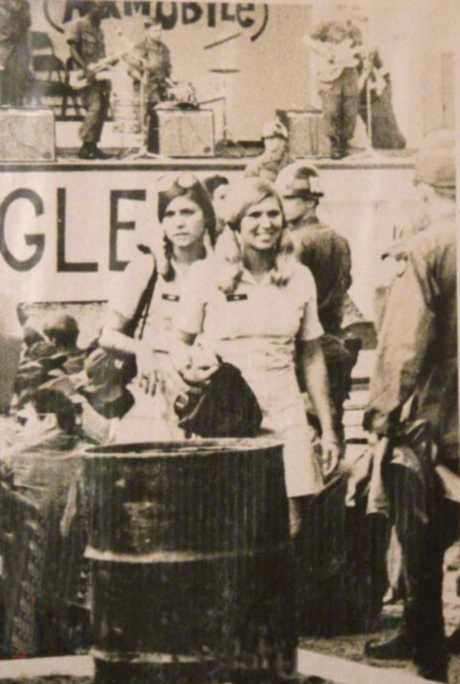 John didn’t get to go, He says he hadn’t been in the bush long enough for anyone to even talk to him yet,
much less to get picked to go!

The USO show on Christmas Day 1970 saw more than 19,000 troopers jam into the Eagle Entertainment Bowl at Camp Eagle, HQ of the famed Screaming Eagles to get their “Christmas Hope”. Along with Bob Hope on the tour were Cincinnati Red’s catcher Johnny Bench, singers Lola Falana, Bobbi Martin and Gloria Loring, the Ding-A-Lings, the Golddiggers, Les Brown and his Band of Renown and Miss World – Jennifer Josephine Hosten.

“I just discovered your web-site. I was with Bob on all the trips shown here, as a member of the Les Brown Band. I just want you to know that those tours are my very fondest memories of my career. If I could repeat just one gig from the past, it wouldn’t be one of the big Hollywood openings, or a motion picture score, or one of the presidential inaugurations, or Carnegie Hall or the White House, or any of my other gigs of the last 49 years as a professional musician in Hollywood. I would choose to play for you guys again at Camp Eagle, or Chu Lai, or Long Binh, or Plaiku, or any of those places now forgotten by all but those who were there back when. Playing for you guys was the absolute best. And I’ll never forget the cheer that went up when the announcer said, ” And now, here he is…Bob Hope,” or the tears streaming down all our faces when we
played our final number, Silent Night.

God bless you each, and your loved ones, and all those who live on, on that sacred Wall in Washington.

Thank you for the memories.”