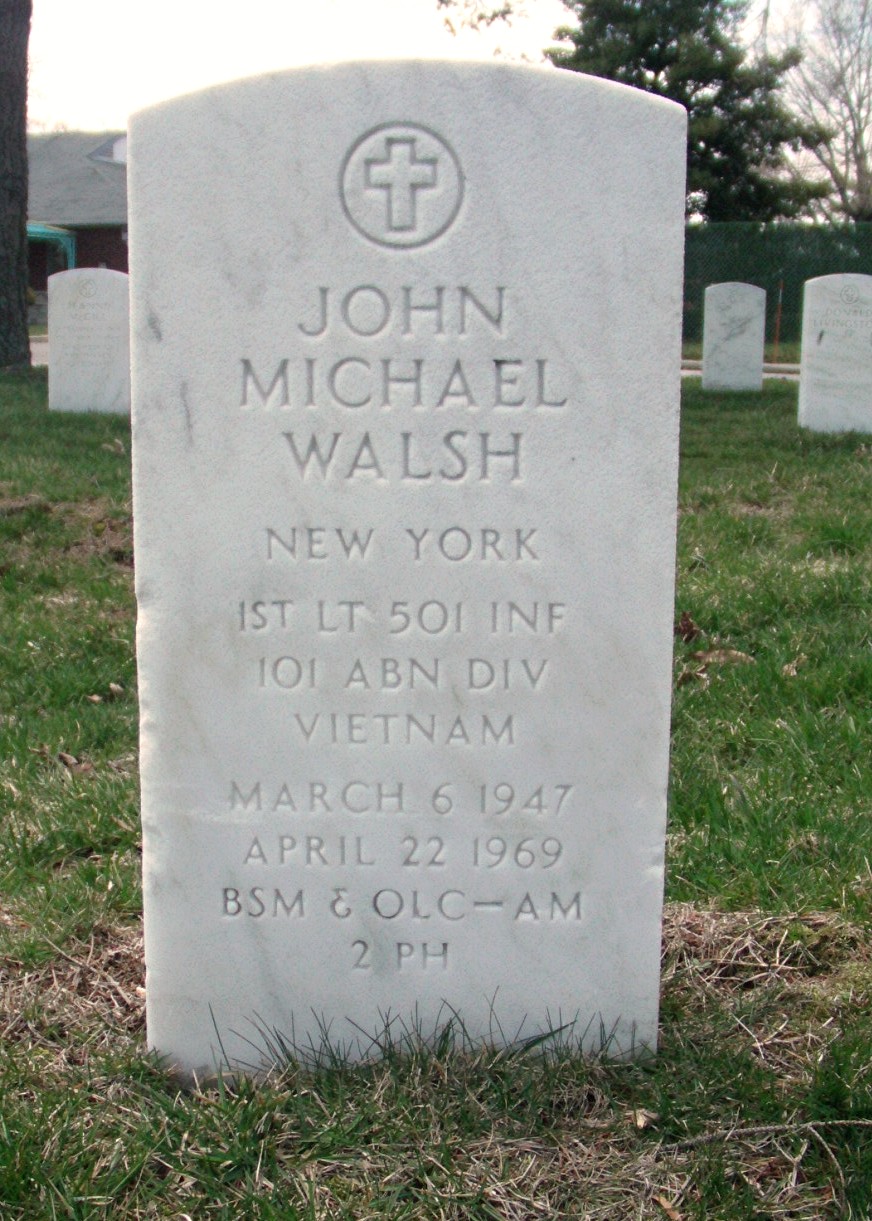 John is buried at Long Island National Cemetery and is honored on Panel 26W, Row 28 of the Vietnam Veterans Memorial 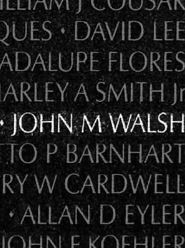 “I remember John well, have all good memories of him. We served together.”
~Dave Reinheimer

“I remember you as if it were just this morning.”
~Jim Julien

“Lt Walsh was the best lieutenant I have ever served with. John was one of my platoon Lieutenants and I was the 2nd platoon Sergeant. He was a hero in my eyes, and that of his platoon. John was there for all the men and always was there for me. He will be missed and I pray for him each day of my life. He made me become a better Sergeant, and helped make me the man I am today. His professionalism and Humor made life in Vietnam bearable. I will never forget him, and the world lost a great man.”

“I was a medic with Bravo Company and Lt. Walsh died in my arms. I was with him when we were ambushed that morning as we broke camp and prepared to move out. I was standing just a couple of feet from John when AK’s opened up. Everybody hit the ground to take cover, and John immediately got on the radio asking for machine gun support and directing fire. He said, we’ve just been hit, get a couple 60s up here and I’ve been shot full of holes. I crawled over to him and said ‘where have you been hit?’, and he wasn’t sure. His wounds were not immediately apparent, then he complained of pain in his side. I found he had been hit in the side under his arm. As I started to examine him he started gasping for breath and pulled me to him. His last words were, ‘Tell my wife’—–. He never finished. In the short time I knew him, he talked of his family and his love of them. I wish I had known him better, and I wish could have passed on the message to his wife. If you have her information and can pass it on, please do. Feel free to contact me if you need any other info.”

“Walsh, you’re forgiven, I know the reason you took my radio soon after Driver died. The Company Clerk revealed the answer, I was missing something in the company safe, something you had access to as an XO. Was I dispensible, being an Indian, worth just over $350.00? In April 1969, I hadn’t a clue what you were trying to do. This hurt; the impact lasted for 35 years. I did my best to serve the US. I have learned we’re not all the same, but I have outgrown the skin color thing! Rest in peace.”

“I remember John well. We along with about 6 other junior officers shared the same “officer’s hooch” at LZ Sally when John’s unit was not in the field, which it most often was. His cot was right across from mine about 7 feet away. His kindness and friendliness to all made him most unforgettable in my mind. I never expected to laugh in Vietnam but John could tell funnier stories than anyone I have ever met. I laughed many times because of John after I arrived in country. I don’t remember laughing again while in country after April 22, 1969 though. The thing I remember most about John was how evident it was that he loved his wife so much. He seemed to never stop mentioning her and how great she was. It was frustrating to be single at the time and realize how much in love he was. I only had the privilege of knowing John 4 months but to this day I miss him very much whenever I think of him. He and his family are in my prayers.”

If you have photos or memories of Walsh that you would like posted on this page,  please email the webmaster