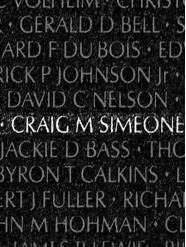 Craig Michael Simeone was born and raised in Cohasset MA. He lived at 34 Bancroft Road and was a member of the Cohasset High School graduating class of 1966. He was well-liked by his classmates and his best friend, former state Sen. Bill Golden, said he remembers everyone wanting to be friends with Simeone, who had a great sense of adventure and was always full of excitement. Simeone’s zest for life sparked an interest for car racing and his aunt Anna Abruzzese remembers how he used to race his Barracuda (a 60s model sports car)in New Hampshire on the weekends.

Perhaps it was his infectious nature that led fellow classmate and neighbor Maureen Brennock to ask Simeone to be her date for the senior prom. The two
walked to school together every day, and when Brennock posed the question, Simeone, of course, said yes.

But it wasn’t just Simeone’s enthusiasm that drew friends to him. His friend, Bill Golden said it was the way he would always go out of his way to ensure everyone felt included. However, Simeone’s young life came to an end too soon, as shortly after graduation, he was drafted into the U.S. Army and assigned to the 101st Airborne Division. In 1 year of service, he attained the rank of PFC/E3. He would never return home to the town he loved. On 30 May 1969, Simeone, a grounder in Company B 2nd Battalion, 501st Infantry, was conducting ambush patrols near Dong Ap Bia Mountain, on the western border of the A Shau Valley in Vietnam. His platoon moved into an ambush site along a trail and began waiting for possible enemy troops that might move along the trail at night. At about 10:15 p.m., several North Vietnamese were spotted moving toward the platoon’s position. When the enemy forces were in range, Claymore mines were detonated, killing four of the hostile troops. That in turn led American forces to emerge to assess the result of the ambush. The Vietnamese who survived the attack immediately retaliated, killing several friendly troops and wounding several others. Simeone volunteered to attempt to reach the wounded men who were unprotected from enemy fire. He and his platoon leader crawled forward to aid the stricken men, but were observed by the enemy force. As he neared the casualties, Simeone was mortally wounded. He perished in the service of our country. Vietnam took a heavy toll on the town, as eight other men from the town were also killed. Cohasset lost the same number of soldiers during World War II. The worst eight months of Vietnam were in 1969, when the town lost five men, four at six-week intervals. Simeone was one of three young men from the Cohasset High School Class of 1966 to sacrifice his life.

Craig is buried at Woodside Cemetery in Cohasset, Norfolk, Massachusetts

For his bravery and service in the war, Simeone was honored with many military awards including the Bronze Star Medal with V for valor with the Oak Leaf
Cluster in light of his second award, the Purple Heart Medal. He was also awarded the Vietnam Service Medal, Vietnam Campaign Medal, Good Conduct  Medal, National Defense Medal, Parachutists Badge, Combat Infantry Badge, along with numerous other campaign and unit awards. Simeone will always be remembered for his good-natured ways and love of life. Even after his passing, he continues to inspire those around him.

Simeone’s death had a profound impact on Golden who was studying at Yale while his friend was serving in Vietnam. Golden said losing Simeone made him
realize he wanted to find a way to give back to his country, like his friend had done by serving in the military, and he decided he could serve his country well in politics. To ensure his memory is never forgotten, a memorial square has been dedicated in Simeone’s honor, which residents drive by every day. Located in a fitting spot, Simeone’s memorial square can be found at the intersection of Lantern Lane and Pond Street, just down the street from his family home on Bancroft Road. The square was dedicated in his memory in Nov 1996. Chairman of the Veterans Memorial Committee Glenn Pratt provided the Mariner with the information for this article.

You can find CRAIG MICHAEL SIMEONE honored on the Vietnam Veterans Memorial on Panel 23W, Row 23. 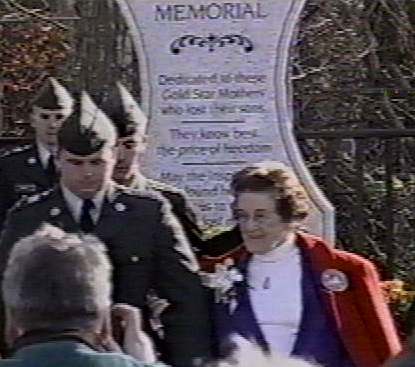 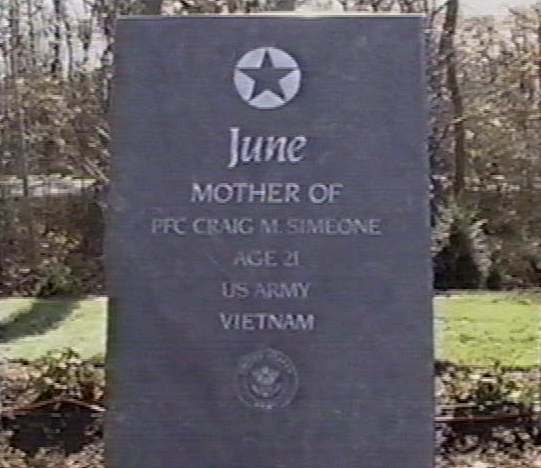 Above are photos from the Goldstar Mothers Memorial Dedication Service that was held in Cohasset MA at Woodside Cemetery on 11 NOV 2001. Simeone’s Mother, “June” is pictured in the photo on the left. The words on the memorial – “Dedicated to these Gold Star Mothers who lost their sons. They know best the price of freedom.” The marker on the right is the one dedicated to Simeone’s Mother.

Thanks to TIM GOULD for capturing these photos from a VCR tape that was sent from Glen Pratt of the Veterans Memorial Committee in Cohasset MA. Tim states that he has “a red, white and blue afghan that was knitted by a Gold star Mother and was given to me when I first arrived at Valley Forge General in the cold winter of 1969; bless those Mothers!”

“I served with him in A Shau Valley. We were in the same squad. I wasn’t with Craig long before his death. The place he died was located in the A Shau Valley that later became known as ‘Hamburger Hill’. We were over run by the NVA. It was a horrible night. About 12:30 AM pouring down rain. We were covered by fog so there was no visibility at all. We were engaged in a horrible night of fighting. Robert Watt, Edwin Dotter, and Louis Johnson were also killed that night. Bobby George was wounded pretty bad. My wife and I went to Cohasset MA in 2001 and stayed the weekend with Craig’s Mother and Dad. I have made three trips back to Vietnam. I have been allowed by God to be involved in missionary work there. I feel I owe approximately 59,000 men and women to make my life count. So my mission now is to be the best man I can be. I realize that can only be possible through God.”

If you have memories or photos of Simeone that you would like posted on this page,  please email the webmaster