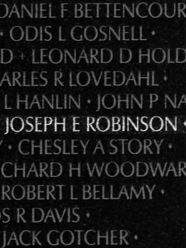 Joseph is honored on Panel 45E, Row 50 of the Vietnam Veterans Memorial in Washington DC  and is buried at Jerome Township Cemetery in Sanford MI 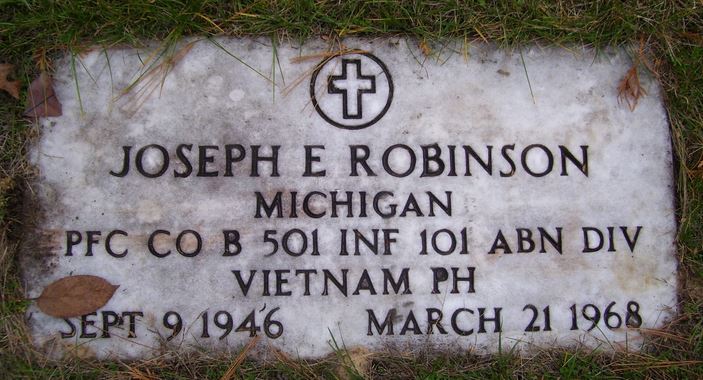 Joseph is also listed on the Michigan Vietnam Memorial (as J E Robinson) at Island Park in Mt Pleasant, Michigan

Joseph was Killed In Action during the Viet Nam War, along with 3 others in his unit; Daniel Bettencourt, Raymond Mason and Ronald Sadler. Robinson was 21 years old when he died from wounds he received when his base camp 5 KM West of Hue in a night position, came under attack. He was in Vietnam for four months. He served with the B-2/501st Infantry (101st ABN Div). He is honored on Panel 45E, Row 50 of the Vietnam Veterans Memorial in Washington DC.

His granite marker has Robinson’s name in black lettering, along with his date of death, the seals of the 101st Airborne Division and the82nd Airborne
Division, and two American flags. The words, “Some Gave All,” KIA.” And “Vietnam” are also written in black. 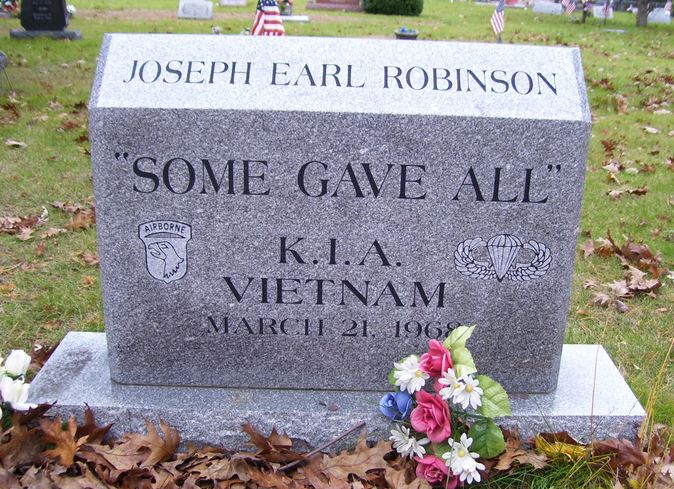 In October 2007 Representatives from the Sanford American Legion Auxiliary, the Blue Star Mothers of America Chapter 48 of Sanford, the Vietnam Veterans Motorcycle Club, the Forgotten Eagles of Michigan and Sanford American Legion Post 443 were in attendance to place his new marker on his grave. Sanford residents Jim Leigeb and Elliott Levely managed the fund-raising effort, which started in May 2006, to purchase the marker. “He was a brave young man who fought for his country as hard as he could,” Leigeb said. “Unfortunately, it took his life. I know Joe is being honored today the way he should have been in 1968.” Levely, also a Vietnam veteran, remembers Robinson as a tough kid who lived with his family on Smith Street in Sanford. Robinson’s mother died when he was young and his father was an alcoholic. “He was my brother,” Levely said. “We were raised together … he was part of my family and now he is a part of our heritage.”

If you have memories or photos of Joseph that you would like posted on this page, please email the webmaster