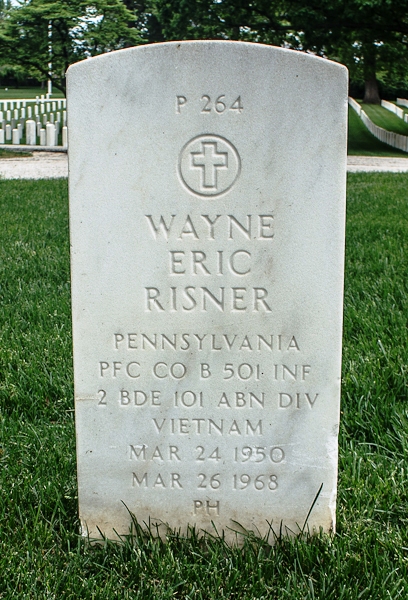 Risner told his father he thought he would have difficulty shooting at anyone in Viet­nam, but said he changed his mind when he saw what the Viet Cong were doing. He at­tended Olney and Frankford high schools be­fore enlisting in the Army in April 1967. The private first class, a rifleman, was assigned to Company B of the 2nd Battalion, 501st Infantry, 101st Airborne Division. Risner died near Hue, Thua Thien Province, on March 26, 1968, two days after his 18th birthday. He was survived by his parents and two brothers.

… from the Philadelphia Daily News

“Yo Wayne remember just hanging around ‘Gina’s’.’He which hath no stomach to this fight,let him depart.But we in it shall be remembered;we few,we happy few,we band of brothers; for he today that sheds his blood with me shall always be my brother.’ –(W.Shakespear). Rest in peace, Brave Soldier, you have not been forgotten.”

“Although I never knew you, I met your brother Warren at the 101st Vietnam Vets reunion. You are still my Brother and omrade. Rest in Peace my friend. You are a Hero to me.”

“Hey Bud, It’s Memorial Day weekend 2006, and if you were still with us, we would have shared and celebrated our 56th birthdays one month apart, mine being on February 18th, and yours on March 24th. I always remember your birthday when it passes, and I think about you countless times during the year. We were so goofy when we were growing up; you always made me laugh, and we were best pals for a lot of years – from third grade on through Junior High, and then into high school, when we kinda went in different directions. I remember you being with me at a life-changing event for me – we saw The Beatles in Philly in ’64, and I went on to be a part-time musician, which I still am at age 56, with my main influence being…The Beatles! Who knows – maybe we could have learned instruments together and started our own band! But it wasn’t to be, and even though it’s been almost 40 years since I’ve been with you physically, you’ve never left me; your spirit, sense of fun, and friendship, has remained in my heart. I love my pal Wayne like a brother, and I always will. It can be a pretty tough world sometimes, and I think of you, home with God and enjoying your eternal rewards, and I look forward to the day when we’ll see each other again. Be well, my pal; you’ll never be forgotten.”

If you have photos or memories of Risner that you would like posted on this page,  please email the webmaster