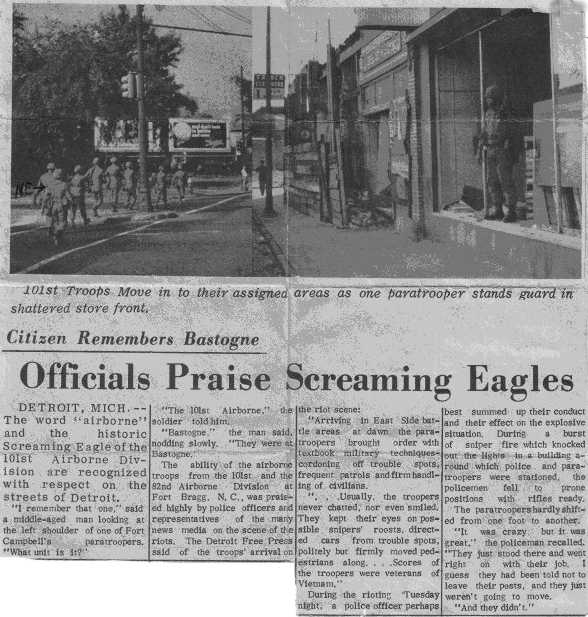 The Detroit Riot of 1967 began when police vice squad officers executed a raid on an after hours drinking club or “blind pig” in a predominantly black neighborhoods located at Twelfth St and Clairmount Ave. They were expecting to round up a few patrons, but instead found 82 people inside holding a party for two returning Vietnam veterans. Yet, the officers attempted to arrest everyone who was on the scene. While the police awaited a “clean-up crew” to transport the arrestees, a crowd gathered around the establishment in protest. After the last police car left, a small group of men who were “confused and upset because they were kicked out of the only place they had to go” lifted up the bars of an adjacent clothing store and broke the windows. From this point of origin, further reports of vandalism diffused. Looting and fires spread through the Northwest side of Detroit, then crossed over to the East Side. Battles were pitched with guns and knives, making the area a no-man’s land. Within 48 hours, the National Guard numbering about ten thousand troops, was mobilized by Governor Romney, followed by President Johnson sending in the 82nd and 101st Airborne. As police and military troops sought to regain control of the city, violence escalated. he airborne units used to hit the road downtown about five thirty in the morning (before the baddies were up) with rifles, one mag, and do some PT. You could hear them coming, as the Airborne Shuffle done in time–which, of course, is how they did it–it was like a big bass drum. Add the testosterone-laden chants and it’s INTIMIDATING. That was the point.At the conclusion of 5 days of rioting, 43 people lay dead, 1189 injured and over 7000 people had been arrested. Property damage at twenty-two million dollars did not include much that was lost by those in the area that had become a charred and waterlogged and rubble-strewn disaster area.

Luther Lassiter, Chuck Maguire were there along with the rest of B Company. Luther says “We were stationed at a local high school in the polish sector of town known as Hamtramack.”

Don Colvin was there with the 82nd ABN. He later transferred to the 101st and went to Nam with the rest of the B-2/501st.

Chuck says, “We were there about 12 days, end of July first part of August. The school was a junior high with a pool. The choppers could land there. We were supposed to jump in, the fair grounds were to be our drop zone, but at the last possible moment they cancelled the drop and we landed at Selfridge Air Force Base. I was the jumpmaster. We spent the night in several locations in Detroit including the Dept of Water & Power. That entire experience made me very uncomfortable. Many of our troopers were excused from going because they had family there. Can you imagine shooting one of your own relatives?”