Approximately 38 km WSW of Hue, 3 km South Southeast of FSB Ripcord, and 2 km East Southeast peak Hill 902. In Thua Thien Province, I Corps. It was the focal point of heavy contact during the seige of FSB Ripcord in Mar-July 70. It drew its name from the fact that numerous men in units fighting here re-enlisted to get out of further combat. It was really just an NDP near FSB Ripcord. The 3rd platoon of D/2/501 were sent here to reinforce B Co after C Co had been involved in a nasty 2 day fight. 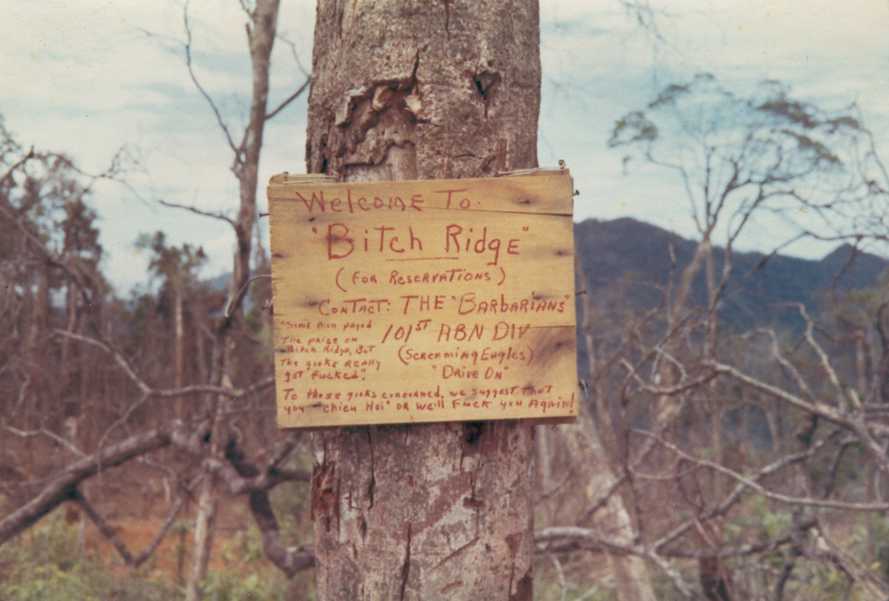 According to Al Werth, RTO for B Company, “the reason we were sent out into that AO in the first place was to look for a downed chopper. An old friend Bob Minko (Killed by the CIA several years ago) with Recon was in that area weeks before our CA. They reported two regiments of NVA that marched into that area. They had livestock and women with them. Bravo operated in and around Re-Up Hill for 18 days. A chopper was sent out to pick up anyone that wanted to reenlist. At that time Bravo and Charley company were on Re-Up Hill. Three troops got on the bird; I don’t remember if any were from Charley company. As far as I remember, at least two of them did not reenlist when they reached the rear. We, Bravo, named it Re-Up Hill. We (Bravo & Charley) were out of food and almost out of water when that chopper came in. It put one skid and a rock to steady the bird as the three men left Re-Up Hill. The only thing that came off that chopper was a red bag of mail. I remember that very well because I received a Dear John from that very bag. For the record, we were joined by Charley company on Re-Up Hill because both companies combined did not make up two full platoons. We were ordered to walk off Re-Up Hill at dusk one night. We were to join Alpha further up the ridge line. Alpha cherries blew a claymore on us as we approached, I was third from point. Hard-Luck Alpha was named before FSB Granite and Henderson. I remember the time an Alpha troop was hit with a rocket from a Cobra–talk about hard luck. I watched FSB Granite get overrun and was lifted on to both FSBs the day after they were overrun. We did not found bunkers in that area. Anyone that was on Re-Up Hill may remember the dink 51 that fired at the Bird-dog and F-4s one afternoon. The 51 was setup after we were in the area. I have maps of the AO, and remember it like it was yesterday. There were three Alpha troops that were still walking when we landed on Henderson that morning. As far as I know the rest of them were cherry troops and very dead.”

You are visitor # since