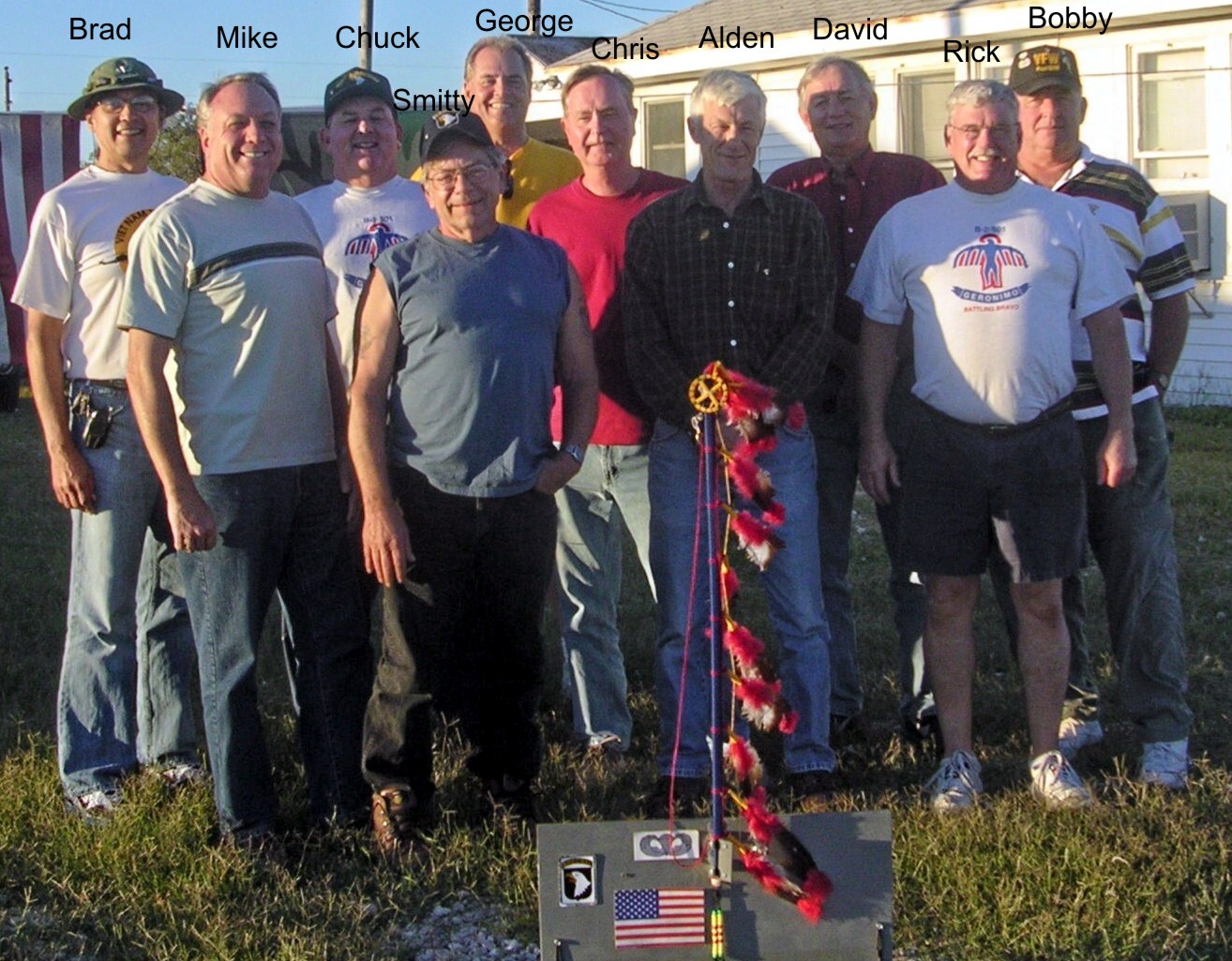 Maguire and Lewellen flew in together from CA. Doc Westwood flew in from Washington. Smitty flew in from Wisconsin. Arbogast drove from Mississippi, Johnsen from Houston and Cat and Brad drove all the way from NY.

First timers were David Kloster and Alden Stanley. Alden brought his wife, Linda–they flew in from Massachusetts, and David brought his son, Eric–they drove in from Missouri.

The reunion was held 27-31 Oct at the Bayside House of the Bauers, same as last reunion. Ira did all the cooking again and a FANTASTIC JOB, at that! We had fresh fish every day, caught right from the bay just hours before! We had great weather–in the 80’s during the day and 50’s at night. No rain. Doc took some of us out on Deke’s pontoon boat, where we toured the bay. Cat, Willie and Ira did some crabbing one afternoon and then Maguire w/Ira and Willie tried their hand at it the next day. Some took side trips to explore the area. Some watched football, then enjoyed a nap at will. LOTS of talk about old times and we whiled away other hours looking through the 1000 photos Salsbery had sent the Jimersons. We toured Doc’s ranch, meeting his brahmas while keeping a lookout for the rattlers and scorpions! Met Sampson, his good-ole-boy 14 yr old dog too!

We called Pat Torres and Duffy Casey, taking turns passing the phone around so we could all talk to them–they were unable to attend due to illness. Had a short ceremony one day, with Jimerson saying a prayer for those who were ill and those who had passed on. The eagle staff
was then passed on to Maguire who will hold it in his proud possession until we meet again.

Cat gave each one an updated roster, complete with address, email and phone numbers. Jimerson passed out B-2/501st 101st AIRBORNE bumper stickers and some hat pins that we had picked up at Ft Campbell, on the way. The barracks where B-2/501st were are still there but will be torn down soon.

Several of us signed up w/memberships in Doc’s VFW group. We took lots of photos–WHAT A GREAT BUNCH of good looking guys, hearing aids and all! Still AIRBORNE ALL THE WAY! Plan to attend the NEXT ONE in 2008! If you’re an original and you are on our mailing list, you’ll
automatically get an invitation.

Like Brad’s AIRBORNE shirt? Visit SUPPLY SERGEANT and get one!

(Enter AIRBORNE in the searchbox at SUPPLY SERGEANT and 21 pages of
merchandise come up!)