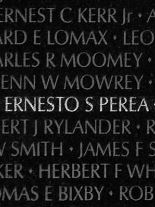 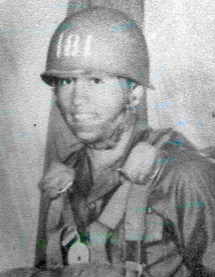 Ernest grew up in Pecos, Texas and attended Pecos High School. After high school, he enlisted in the U.S. Army National Guard in 1963. He went active duty in the Regular Army in early 1967. He completed jump school and became airborne qualified at Fort Campbell, Kentucky with the B
Company, 2nd Battalion, 501st Airborne Infantry Regiment, 101st Airborne Division. He re-enlisted in the Army in 1967 and was in his fourth year of service. He was married to Gloria and the father of two children, a son, Daniel and a daughter, Elizabeth.

Ernesto went to Vietnam with his unit from Fort Campbell when the 501st Airborne Infantry mobilized in November and
December of 1967. The unit had a stop-over for training at Wake Island. The unit arrived in Vietnam in December 1967. Ernesto was a gunner in the first squad of the third platoon.

Ernesto was killed from multiple fragment wounds during hostile action on March 26, 1968.

“Chava, I remember you visiting my parents home with your wife and baby. Our families were always getting together. I was only 11 years old when I learned you died in Vietnam. I felt sad and I have never forgotten you. I was very happy when I read that you received a Purple Heart and all the other honors. God Bless You!” 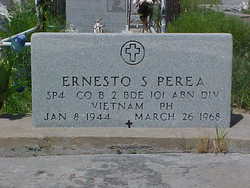 He was buried with full military honors at Santa Rosa Catholic Cemetery in his hometown of Pecos, Texas.

If you have photos or memories of Perea that you would like posted on this page, please email the webmaster