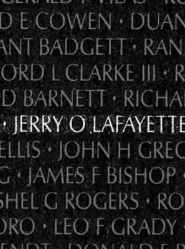 A Moment of Silence, A memorial tribute to Jerry O. LaFayette, first Concrete High School graduate to give his life in the war in Vietnam, replaced usual pre-game festivities at the Lions field Friday evening. A public memorial service is scheduled at 2:30 today (Thursday) at the high school (Concrete Herald, Concrete WA)

Memorial Services for the first Concrete High School graduate to give his life in the war in Vietnam; Specialist Four Jerry O. LaFayette, were held at Concrete High School with Pastor William Bridge and Capt. Jamison officiating. The 21-year-old soldier died 25 Sep (1971) in Vietnam as a result of enemy action. He was the first Upper Skagit man to become a casualty of the Vietnam War. He was born 30 Jan 1950, in Burlington and was a senior at Concrete High School when he was drafted. He was united in marriage to Ellen Gay Dellinger 19 Dec 1970. Funeral services were held at Liberty Freewill Baptist Church in Rockport with the Rev. Fred Dellinger and the Rev. William Bridge officiating. Interment followed services at Freewill Baptist Cemetery with military honors provided by a color guard and firing squad from Fort Lewis. Survivors include his wife, Ellen of Concrete; his step-father and mother, Mr. and Mrs. Bill Stone of Concrete; a sister, Mrs. Carol Shearer of Burlington; two brothers, Mickey LaFayette of Fort Hood TX, and James LaFayette of Concrete; four half-sisters, Sandra, Melanie, Julie and Wendy Cassell of Sedro Woolley; a half-brother, John Hooven of Concrete. Grandparents, Mr. and Mrs. Clarence Sanderson of Sedro-Woolley and Mrs. Mary LaFayette of Mount Vernon and a great-grandfather, George Maddox of Mount Vernon, also survive. (Concrete Herald, Concrete WA)

Lafayette is buried at the Freewill Baptist Cemetery in Rockport WA 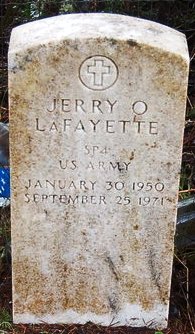 If you have memories of Jerry that you would like posted on this page, please email the webmaster