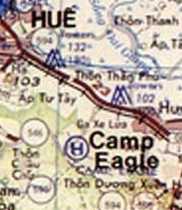 Built along Rte 546 between Phu Bai & Hue, W of QL1 in Thua Thien Province in I Corps. It was FORMERLY known as LZ Tombstone (it was built partly on an old graveyard) and then LZ El Paso when 2d Bde of 101st Abn landed there in Feb 68, en route to Quang Tri. Originally established on 17 Jan 68, it was renamed Camp Eagle on 10 Jan 68 when 101st ABN HQ moved here and began expanding it into a large basecamp. The only known significant ground action against Camp Eagle was on 21 May 69, during Operation Nevada Eagle, when an NVA Bn supplemented by VC Sapper Bn struck the SW edge of the base under cover of over 400 rnds of 122mm rocket, 81 mm mortar and RPG into Div HQ area. 5 US KIA and 34 WIA and 57 NVA KIA resulted.

Grave yard outside the entrance to Camp Eagle (April 69)