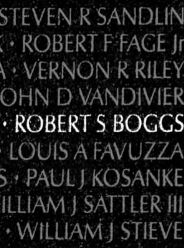 Robert is honored on Panel 11W, Line 66 of the Vietnam Veterans Memorial

“He walked slack one day and said he didn’t think he could kill anyone. His father was a minister; the same religion as I am. He wanted to claim contentious objector. I had sympathy for him because I didn’t like the idea of taking another life either. That is one reason that I decided to become a medic. He was to stay on FB Granite that night and talk to the Chaplain the next day. Bravo walked off the hill and we watched from a distant as the FB was overrun. Boggs lost his life that night. Note: I know that in war, to kill is not a sin. I know that in the 10 commandments it is clearly talking about murder. I really appreciate (love) the infantry, I owe my very life to them!”

If you have photos or memories of Boggs that you would like posted on this page, please email the webmaster