A Screaming Eagle outpost built on the eastern lip of the enemy’s A Shau “warehouse area” on the north end of a long ridge running parallel to the valley in Thua Thien Province, I Corps.  A small knoll about 50 to 75 feet higher than the fire base was located to the east and was incorporated into the defense plan. The west and northwest sides of the fire base fell away at a very steep rate making an approach from this direction extremely difficult. The northeast, east and south approaches were gradual slopes and offered the best avenues of approach into the fire base. The fire base itself was very small. The approximate dimensions were 25 meters wide and 200 meters long; the mortar position on top of the knoll was circular with a 50 meter diameter. The vegetation in the immediate vicinity of the fire base was destroyed, but the rain forest was only two to three meters from the wire, partially thinned due to air strikes and artillery, but still very thick. The fire base was laid out in the shape of a shoe sole with a detached mortar position on the small knoll to the east. Three strands of concertina wire encircled the fire base with trip flares interspersed irregularly in the wire. 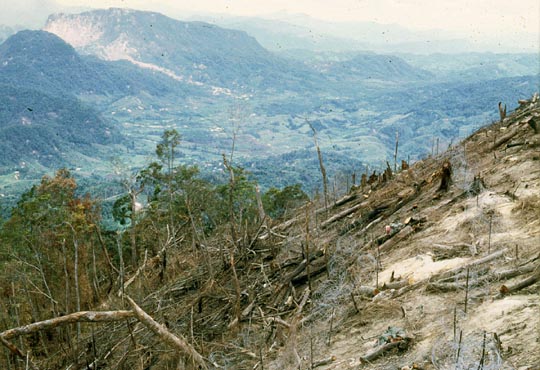 Photo courtesy of Harry Brown (B-2/506 Jan 68-Jun 69)Looking north up the A Shau Valley from the western perimeter of FSB Airborne. Tiger Mountain is visible in the upper left corner.