Roger is buried at Greenacres Memorial Park in Ferndale, WA. 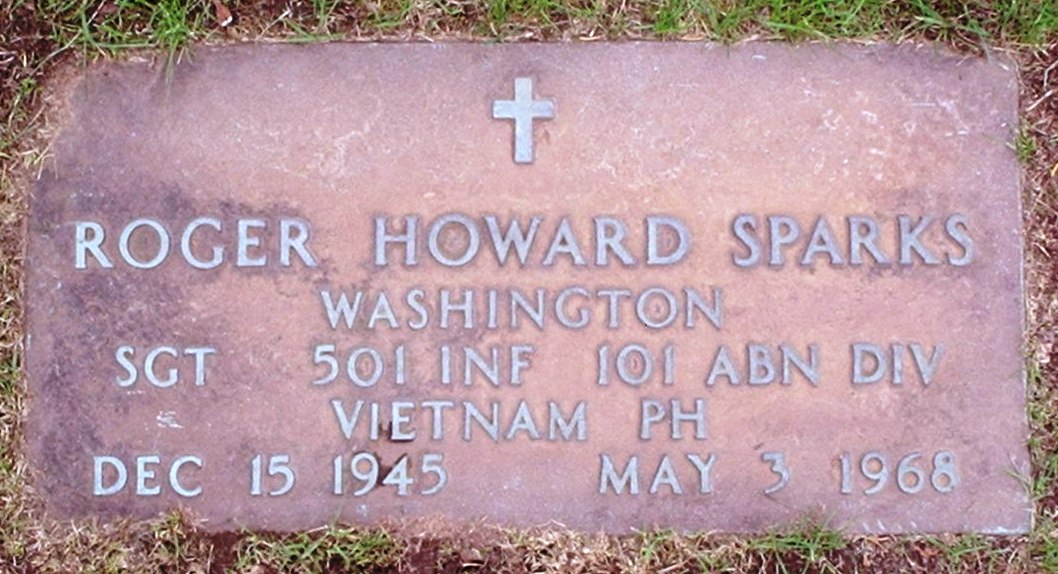 Army Sgt. 4 Roger H. Sparks, son of Mrs. Hilda E. Sparks, 2821 Orleans St. was killed in action in Vietnam, the Defense Department said today. The 22 year old man was with the 101st Airborne Division, and was a rifleman. Sergeant Sparks died 3 May (1968). Sergeant Sparks was born in Bellingham attended Sunnyland Elementary School and Whatcom Junior High School and was graduated from Bellingham High School in 1963. He enlisted in the Army 25 Sep 1965, and received basic training at Fort Ord CA. He was trained in auto repair at the Aberdeen MD Proving Ground and as a generator specialist at Fort Bragg NC Joins Airborne Sergeant Sparks then was assigned to the 101st Airborne Division at Fort Campbell KY, and received infantry training with the 501st Infantry. He went to Vietnam 4 Mar (1968) and served at Bien Hoa, Phi Bai and Quang Tri. Besides his mother, he is also survived by a sister, Mrs. James (Sylvia) Sentman of Long Beach CA and two nephews. The father, Howard L. Sparks, a truck driver for Bellingham Builders Supply Co., died last April. (The Bellingham Herald, Bellingham WA, Tuesday, 7 May 1968)

County Relatives Remember Viet Nam Dead. For many, today is a day for recalling fond memories of an only son, a short lived husband or father known only by pictures. With Memorial Day also comes bitter grief caused by the death of those men. In Olympia, a memorial impressed with 1,073 names was dedicated this weekend. It bears the names of Washington residents killed or missing in action during the Vietnam War. Twenty- four of the names are those of men from Whatcom County. Their deaths are still a great burden for some. “Its so long ago, and yet so close, that its still hard for us to deal with,” said a Bellingham father whose son died in Vietnam 20 years. He did not want to be identified. For others, it brings joy to recount the treasured memories. “To me, he was just about perfect,” Hilda Sparks recalled of her son,U.S. Army Sgt. Roger Sparks.”I’m just glad I had him for 22 years. “Roger was just about the best thing that ever happened to me.” Bellingham’s Sgt. Sparks was a compassionate son and true friend who responded when called and died by an unseen enemy, his 73 year old mother recalled. Sparks was firing a rifle in a firefight when a mortar exploded nearby, his mother said, she can’t read war stories, look at war pictures or listen to or watch anything “that hurts our young boys.” “I try so hard to live above this because I can’t let it get me down,” said Hilda Sparks, whose husband died before her son. “It was so hard at first. I hated the whole world. Now I feel sorry for our young people. He has been gone for 20 years, and I still miss him.”

If you have memories of Roger that you would like posted on this page, please email the webmaster